IT was a tragedy that shattered an island and broke the heart of a country.

Now, as the centenary of the sinking of the Iolaire – which claimed more than 200 lives after going down off Stornoway as it ferried soldiers home from the war – approaches, a special tribute will be paid.

Playing the Lament For The Iolaire, one of the highlights of this year’s Piping Live! festival, will be particularly poignant for Roddy MacLeod, principal of the National Piping Centre.

Roddy’s great uncle John MacLeod was one of those who perished in the sinking, just weeks after the end of the First World War, and he grew up with tales of the tragedy.

“They were stories my dad used to tell of the sinking and of John, who was the brother of my grandad and who I’m named after,” said Roddy, who comes from Stornoway.

“But it was difficult to imagine and appreciate it when I was young. It has had more resonance as I’ve got older and became a piper and connected the stories with the tunes.”

The Iolaire was heading for Lewis on Hogmanay 1918, taking First World War troops back to the island for what should have been a joyous start to a peaceful new year.

But the vessel struck rocks close to the harbour and 205 of the near-300 on board drowned in the early hours of the next morning, leaving barely a family on the island untouched.

The sinking is one of the UK’s worst maritime disasters and in the years that followed songs and poems commemorating the event were written.

“Lament For The Iolaire was composed by Donald MacLeod, who is probably our greatest pipe music composer,” said Roddy.

“He was a military piper himself and was brought up in a house overlooking Stornoway harbour, which the troops didn’t manage to reach.

“It’s a very emotive piece and it means an awful lot for me to be doing it.”

Roddy’s performance on Tuesday, August 14, at the Piping Centre in Otago Street, Glasgow, is part of a series of festival events marking the 100th anniversary of the end of the First World War.

Pipers Of The Great War is an exhibition of original photographs and instruments showing the role of pipers.

“There were so many pipers involved in the First World War,” said Roddy. “Many were lost and some of our greatest pipe composers were among those who survived.

“There has been such a long-standing military connection with pipers used to keep up the morale of the troops.

“During the First World War, the pipers would lead the troops over the top and so many of them were mown down within minutes. It’s hard to imagine the bravery of someone striking up their pipes, knowing they were making themselves a target.” 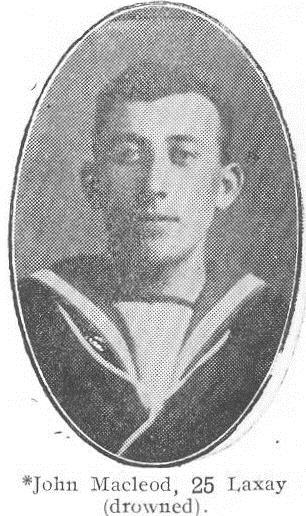 Roddy has also been asked to play Lament For The Iolaire at Kelvingrove Art Gallery and Museum at 11am on November 1, for the centenary of the armistice.

“We had 40,000 visitors last year and people are now coming for the whole week, not just a day or two,” added Roddy.

Piper’s lament for an island of tears: Musician’s moving salute to the victims of wartime Iolaire sinking disaster