TRIBUTES have been paid to two elderly Scots killed when the taxi they were travelling in got caught up in raging flash floods on Majorca.

The couple, named locally as Anthony and Delia Green from the south of Scotland, are understood to have died along with taxi driver Juan Sillero when their car was swept away by a torrent of water near the coastal resort of S’Illot.

Authorities on the popular tourist island said 10 people, three of them foreigners, died when torrential rain deluged the region around the town of Sant Llorenc, about 40 miles east of the capital Palma.

Friend Emilio Dicerbo said everyone in Moffat, Dumfries and Galloway, where the couple lived for more than 10 years, would be “devastated” by their deaths.

“Tony would always get out a bit to the shops most mornings and we would have a blether.

“He liked to go have a game of pool, he loved his wee bit of potted plants outside his front door – he did tend his plants, very neat and tidy.

“He was a (retired) publican and head teacher.

“When Delia was out she would always have a blether, but she was very limited (due to bad health).

“They were a very friendly couple, just normal.

“Everyone will be devastated. Just the kind of characters they were – very friendly.” 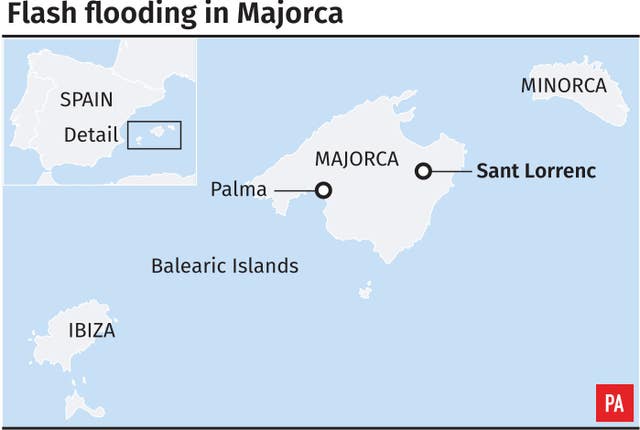 He said the couple, who were aged in their 70s and originally from England, were visiting the Spanish island for a holiday.

Some parts of the island received up to 9in (23cm) of rainfall in a matter of hours on Tuesday evening.

Witnesses described having minutes to find safety as the water levels rose, inundating houses and catching motorists off guard.

The floodwaters tore down trees, swept numerous cars and trucks into piles of twisted metal and buried streets under mud.

Mr Green, 77, and his wife, 75, were being driven to a hotel in Cala Bona when the taxi was caught in the floodwaters, Diario de Mallorca reported.

Rescue workers reportedly found the car submerged and on its side at the mouth of the torrent in S’Illot at 2am (1am BST) on Wednesday.

Military divers found the couple’s bodies still inside, while Mr Sillero was later found lifeless nearby, the paper said.

A Foreign Office spokesman said: “We are supporting the family of two British people following their deaths in Spain, and will do all we can to assist them at this deeply difficult time.

“Our staff remain in contact with the Spanish authorities who are responsible for responding to the floods, and are ready to assist any other British people who require our help.”

Spanish authorities said 80 soldiers and seven vehicles from the military’s emergency unit had joined more than 100 rescuers deployed in the area on Wednesday.

Meanwhile tennis star Rafael Nadal, who is from the island, was seen joining in with the clean-up effort.

The world number one invited locals to take shelter at his tennis academy in nearby Manacor and then donned boots to join other volunteers.

“Sad day in Majorca,” the 30-year-old said on Twitter.

Spanish PM Pedro Sanchez called news of the flooding “devastating” as he visited the area on Wednesday.

He said: “My solidarity and support goes out to the families and friends of victims and all the affected by these tragic floods,” he said.

This error message is only visible to WordPress admins

Please go to the Instagram Feed settings page to create a feed.