After all the week’s hullabaloo, what is ultimately to be made of the unseemly haste of Brendan Rodgers’ departure from Celtic?

In May, 2016, basking in the glow of his high-profile return to management, the Northern Irishman positioned himself as a man in touch with the Hoops’ emotional heartbeat.

He spoke first of his admiration for the late and much-loved Tommy Burns, his boss at Reading, where he started his coaching career.

Then, when invited to compare the similarities of Liverpool and Glasgow, he moved away from his personal experience to dig deeper into the mine of club lore and legend.

“There are parallels – but this is different. This is family. This is blood. This is Gallacher, Johnstone, McGrain,” he said.

This was powerful stuff.

Anyone in any doubt about how deeply the club’s fans care about their history should consider that in 2010 they marketed a lavish book – the Celtic Opus – which weighed 40kg and retailed for just under £2,000.

500 were produced. Try getting your hands on a copy today.

Celtic’s is a rich heritage, to be handled with care. So Scotland’s footballing world pays close attention to the sort of statements Rodgers came out with on the day.

It is both sensitive to insincerity and unforgiving of hypocrisy.

The timing of Rodgers’ exit left him open to accusations of both failings.

Before Wednesday’s match at Tynecastle, some of the fans who had woken up to find their “Here for 10 in-a-row” manager had snuck off for another club under cover of darkness raised a banner which made their feelings crystal clear.

“You traded immortality for mediocrity. Never a Celt, always a fraud”. 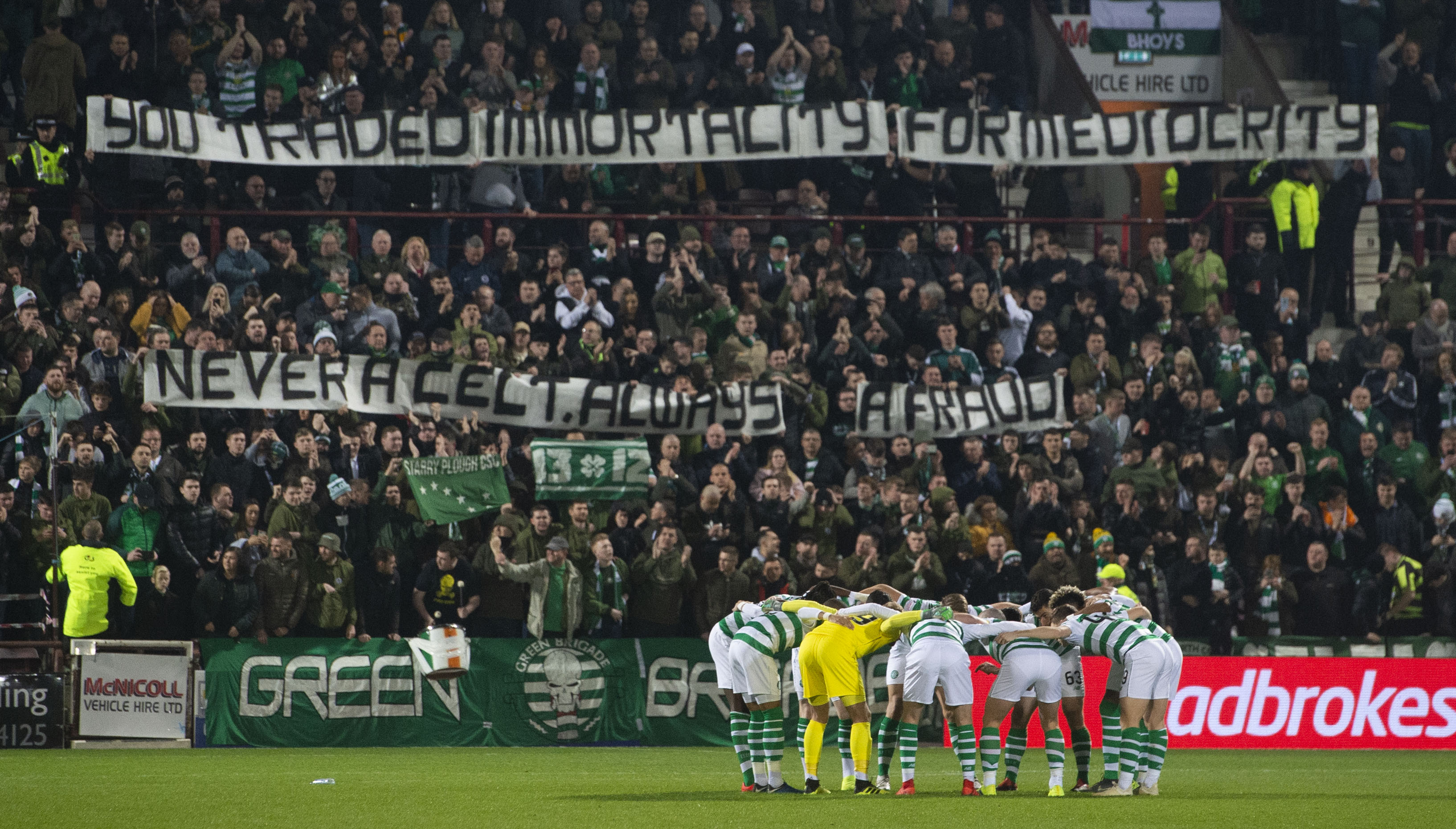 It has been whispered that a number of the team’s stars privately shared that view.

The absence of social media well-wishing from them spoke volumes.

Even John Kennedy, one of Rodgers’ assistants and hastily promoted, acknowledged there would be some who could struggle to get over what they see as a betrayal.

What many are clutching as a badge of dishonour where Rodgers is concerned is the haste with which he jumped ship, especially with huge games at Tynecastle and Easter Road on the horizon.

Rodgers insists there was no wriggle room at all, and that Leicester City made it clear the job was his to take, or lose, at the start of the week.

But from a Celtic perspective, delaying the switch by just a few days would have made all the difference to how the Irishman will be judged in the annals of the club’s history.

Had he been able to stay in place just long enough to get through two crucial games unscathed before heading south, his decision would have been more palatable to the Green Brigade and those who take their lead.

With the Scottish Cup semi-finals over a month away, interim manager Neil Lennon would have had time to first calm the squad, get it playing his style of football and then build momentum from there.

An alternative, admittedly cynical, view is that Rodgers’ instant appointment after the sacking of Claude Puel actually suited him.

Missing out on the tie against Hibs at Easter Road – something of a bogey ground for the manager – was a guarantee his perfect domestic record would be protected.

That there would be no low to finish on, no dilution of a trophy haul which stands comparison with predecessors Jock Stein and Martin O’Neill.

On the streets of Glasgow’s East End, other figures are deemed more relevant. Specifically, the £5m-a-year salary Rodgers has just accepted to work in the English Midlands.

“What is he doing still up there?” queried one fan, loudly in the presence of journalists leaving Lennon’s unveiling on Wednesday morning.

The subject of his ire was the jumbo photo of Rodgers and his players on an open-top bus parade which adorns the main stand entrance to Celtic Park.

Then Glasgow’s gallows humour kicked in, with another adding: “Ach, they don’t need to get rid of his picture altogether. Just stick him in a fast car heading out the door instead.”

In fast changing times, the fickle nature of football remains a constant.

Or, as Pedro Caixinha – in the opposite dugout the day Rodgers’ Celtic had a record 5-1 win at Ibrox – was fond of saying, the dog barks and the caravan moves on.

Insincere and hypocritical or did Brendan Rodgers have no choice but to leave Celtic?